What has washed up? Pieces of History

Today's post is the first part of a series about the individual objects that make up marine debris. While tons of debris have washed ashore so far, it is easy to forget that each object has a story- it had an owner, an origin, and a purpose before the March 11 events transpired.  In a way, these objects can link us directly back to the people affected by the disaster.

We will not know what is going to wash up until it actually happens.With the 8 million tons of debris that were washed out to sea, there will likely be hundreds of incredible stories - published or not - that will be revealed in the next year. However in the first few months of debris, there have been some incredible stories that have already happened. I'd like to profile some of them briefly here.

In March 2012, a 150-foot shrimping vessel was discovered drifting off the coast of Alaska. Originally owned by the Hokkaido fishing company, the Ryou-Un Maru was not in use during the tsunami, so there was nobody aboard. It was spotted approximately 200 miles from Sitka, Alaska.

The ship's spooky appearance earned it the term 'ghost ship'.


Officials debated for several days on what to do with the ship. When it was apparent that the ship could have caused problems, the Coast Guard decided to take action.

How do you deal with a 150 foot vessel floating in the Gulf of Alaska?  Initially, the Canadian vessel, the 62-foot Bernice C, attempted to tow the ship for the salvage rights. However when those efforts failed, the Coast Guard decided to sink the ship on the spot.

US Coast Guard members pulled out the big guns- highly explosive 25mm rounds, to be exact, and had to fire repeated at the hull to get the ship to sink. The ship didn't want to cooperate, however, as the estimated one-hour sinking time turned into five.  The vessel even initially caught fire, and larger ammunition was used to sink it.  Finally, a bit before 8pm PST, the boat sank into the Pacific.

In case you wanted to believe there isn't any good in the world, this story might change your mind a little. One April day, a local Alaskan named David Baxter was roaming the relatively deserted Middleton Beach.  He noticed a soccer ball floating near the shore, and decided to fish it out.  It wasn't until he held it in his hands that he realized the ball had floated more than 3,000 miles.  Luckily for David, his wife was Japanese and was able to read the writing on the ball. Yumi Baxter read the name of a school, and some good luck wishes made out to Misaki Murakami.


Even more amazingly, Yumi was able to locate Misaki.  She called him on the phone and needless to say, he was amazed by the unexpected call. Misaki was thrilled to hear his ball had been found all the way in Alaska- he had lost everything in the tsunami, including his house.  Yumi and David decided that since they were traveling to Japan, they would return the ball during their visit.

Also found was a volleyball covered in writing, but the original owner continues to be a mystery as there is not enough information on it to track down an owner. The soccer ball is the first object that has been returnable to an owner.
Surely the return of the soccer ball is more symbolic than an act of international aide, but the beauty of the story is that two people who were able to make a difference actually did.  After losing everything, the return of one small object might be a beacon of hope for the human spirit. It is also a hopeful lesson for those of us who might find objects in the future.


On June 15th, a 20 foot fiberglass boat washed ashore on Cape Disappointment, Washington.  The boat has been confirmed to be an artifact of the tsunami due to the Japanese writing found on it.  Most interestingly, the boat had several life jackets in it that also had Japanese writing.  The boat was also likely unmanned when it was torn from shore.  Attached to the boat were large amounts of non-native gooseneck barnacles, much like those that washed up on the Japanese dock found in Newport, Oregon.

On the beaches of Waldport, OR, I have found a number of Japanese water bottles.  They usually appear spontaneously at high tide, especially during the last hour of tidal surge.  The first bottle I found was sitting just above the surf, and I went to go pick it up because I assumed it was litter left by a careless tourist.  Imagine my surprise when I looked at the cap and saw Japanese writing on the top.  The next day I went on a walk and found two more bottles with discernible writing, and several more that didn't have writing but were likely Japanese, due to the buildup of barnacles and algae on them.


Upon picking up a number of bottles and beach trash, I recycled the non-labelled bottles, and put the other ones in my garage to save them.  However, something nagged at me- I felt strange keeping these objects as collectors' items, as if I weren't honoring those people who were affected by the disaster.  I decided to do something about it, and bought some incense at a local shop.  I used one bottle as a container in which I burned a stick of incense, and also had a brief moment of silence for those who lost so much before these bottles reached me on the other side of the Pacific.

I keep one of the bottles in my house now, and whenever I see it I always have a brief moment of reflection and thanksgiving. Instead of merely being a conversation piece (although it is neat), I have an object that gives me a direct connection to those events that transpired, and the people that were affected by them. 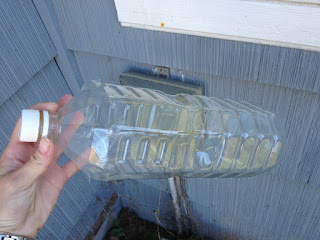 Who held these objects?  Were they long-held treasures, family heirlooms, or something purchased in a passing moment? Were the people like Misaki, who lost everything? Or, maybe the people that touched them weren't even affected by the tsunami at all.  As more debris washes ashore, we will have to raise these questions to ourselves. We may never know the answers to these questions, but we can always do our best to honor those who were less fortunate, and perhaps have some moments of personal growth.