A strange site is greeting beachgoers, fishermen, and coastal residents along the Oregon and Washington coasts this summer- strandings of thousands of jelly-fish like creatures lining beaches and the nearshore waters.  What are these animals? While often mistaken for the notorious man-o-war jellyfish, they are actually a harmless colonial hydrozoan called Velella velella, or 'By-the-Wind Sailors'.

As their name suggests, these animals are relatively helpless subjects of the tides and winds, and as a result, large numbers of these animals strand on beaches if the conditions are just right.  At first, they appear to be just another invertebrate, but upon closer look, it's pretty apparent that there are a number of amazing traits of these animals!  Here are some basic facts about these awesome creatures.


1) Velella velella is NOT a jellyfish, although it is in the same Phylum, Cnidaria, or stinging animals.
Hydrozoans are some of the strangest animals in the seas-  they are related to jellyfish and corals, but aren't really similar to either.  These little animals can live independently or in colonies, like Velella, and are generally predators.  They use specialized stinging cells to immobilize and then consume prey- fortunately these stinging cells are too small to injure us.  Many people may mistake the harmless Velella for the dangerous (and infamous) Portuguese Man-o-War, whose adults are much bigger.   Velella adults are typically less than 2-inches across.


2) Velella velella aren't just one animal- they are a colony of animals, each of which is adapted to do a specific 'job'.
Unlike a jelly, lots of individual immature Sailors come together to form one cohesive unit, which looks like one animal.  This is similar to other sea creatures, such as corals or sea pens, which are my personal favorite colonial invertebrate (in case you were wondering what to get me for Christmas!)  Individuals on a Sailor are specialized for functions such as structure (forming the sail, etc.), feeding, stinging (defense), or reproduction.

3)  Velella velella must believe in cooties.
Colonies of Velella are segregated by sex- some colonies are only male, and some of them are only female.  In addition, this animal reproduces by asexual budding- that is, each animal essentially creates thousands of clones of itself which are then released into the water column as tiny polyps, which then later transform into the adult stage called the Medusa.

4) There is such thing as a right-handed and left-handed Velella.
Velella velella means 'little sail' in Latin.  And that sail is essentially what their life cycle is all about.  Although little is really known about how this organism spends its life, it is known that the species appears to be made up of colonies that have their sail rotated clockwise, while the other section of the population consists of sails rotated counter-clockwise.  For that reason, many of the animals that art found in one stranding event will have sails rotated in a similar direction, since the wind tends to carry them one way.  Other individuals with a different 'handedness' will typically be carried in the opposite direction- that is, farther out to sea.

5) While Velella does have stinging cells, they are too small to harm humans.
Don't panic if you see these guys in the water or on the beach!  They cannot sting you. While other cnidarians are deadly to humans (such as the Portuguese Man-O-War), smaller hydrozoans like Velella are harmless to humans.  These guys drift at the surface of the water, and capture tiny zooplankton floating there.  They aren't really well-adapted to eat (or sting) something much bigger than a grain of sand.


With that, I hope you have learned a few things about these animals, and you know what to look for when you are are out on the beaches this summer!  The ocean really is an amazing place if we take time to have a closer look.

Did you see these guys on the beach? Email me and let me know!
Here are some photos of the recent stranding at Beverly Beach, near Newport OR (Although I was a day or two late, when the animals were pretty well dried up): 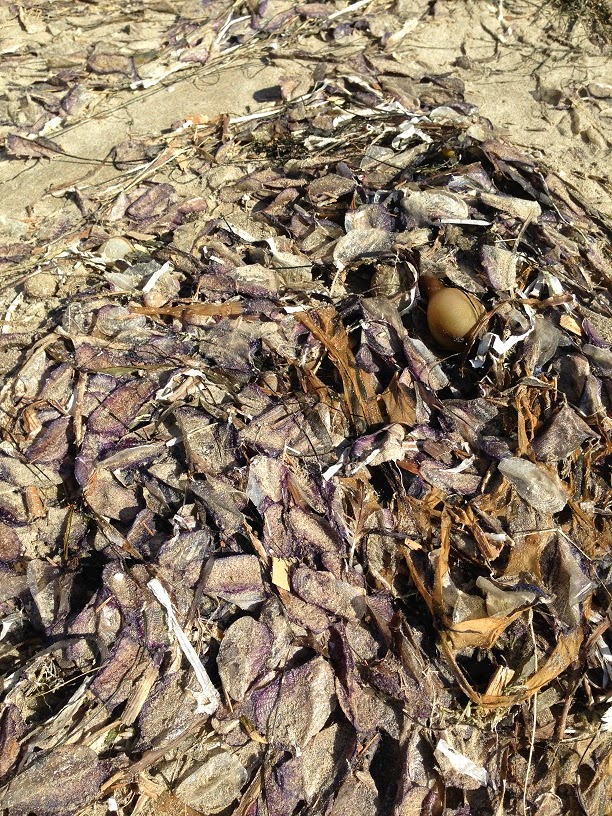 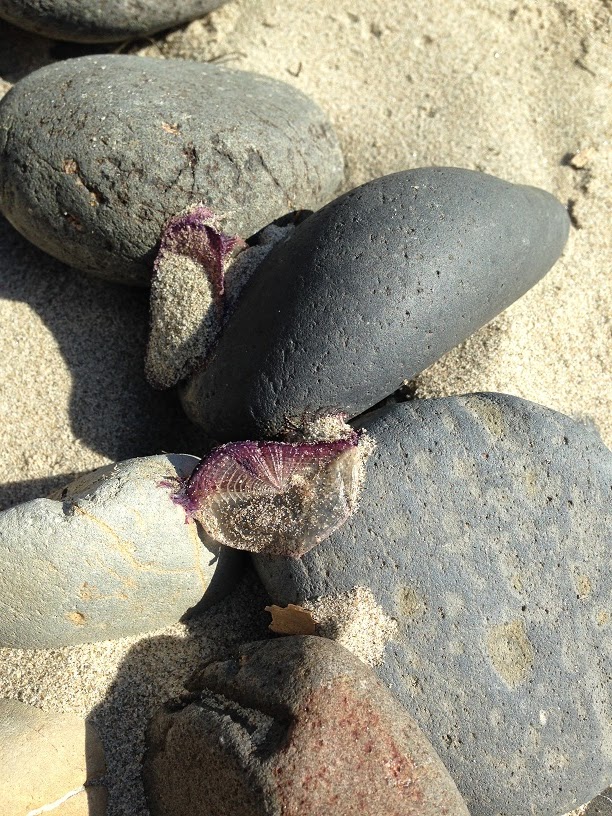