You may all remember when a striped beakfish washed ashore in the hull of a Japanese boat in Oregon in April of 2013.  This little guy was the sole survivor of a group of five that washed up (what a trooper!) and was taken to his new home at the Seaside Aquarium. 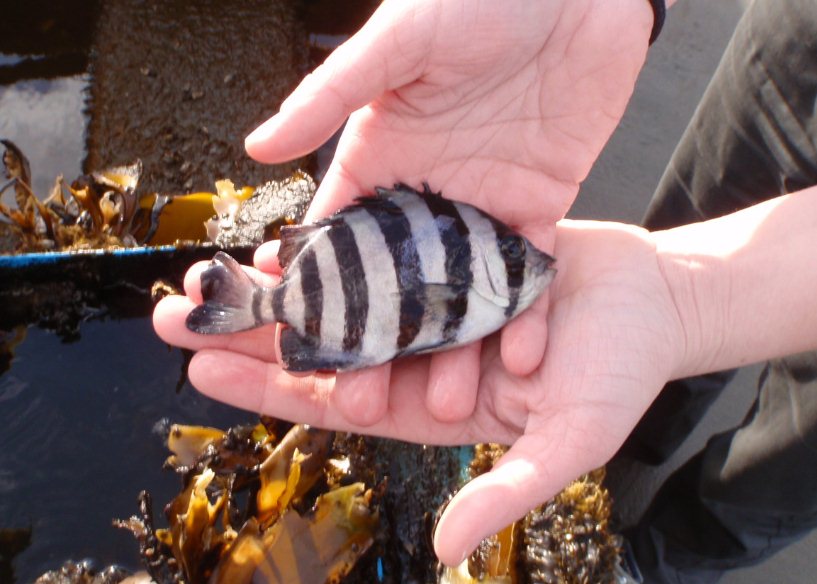 And what many of you also may or may not know, is that another one of these guys washed ashore last month.  To one Oregonian's surprise, the fish was caught live in a crab pot off of Port Orford.  The fish is currently in quarantine at the Hatfield Marine Science Center in Newport, Oregon and off of public exhibit until it shows that it is healthy enough to display or move.


They may look like a tropical species, but the striped beakfish (Oplegnathus fasciatus) is actually a common species in the western North Pacific, including Japan.  Seeing these fish in eastern Pacific waters (like Oregon) appears to be a more commonly-occurring phenomenon, and this might raise concern that striped beakfish just might be hardy enough to become a non-native invader of eastern Pacific waters. However, the fish was likely less than two years old, which suggests that it was not a direct transplant from the 2011 tsunami, but rather likely traveled with marine debris into Oregon waters.    Fish in the open ocean tend to congregate under floating debris or plant material, dubbing these items 'fish aggregating devices'.  A fish aggregating device can really be qualified as anything that floats, and that fish group around.  It's likely that these floating objects provide visual protection from predators lower in the water column, and might also provide shade or other stability.


What's special about the striped beakfish? Well, besides its tropical-like appearance, nothing in particular, unless you account for its apparent adaptability!  What is interesting about them, however, is that they are a commercially sought-after and farmed fish species in Asia, and while many of the individuals found have been 5-6 inches long, they can reach lengths of up to 31 inches. While it is primarily the juveniles that are found swimming under debris, the largest recorded weight for this species is a whopping 14 pounds!

And apparently they are sufficiently delicious to write a comic strip about:

It will be worth noting if more of these guys are observed by divers, fishermen, or wash up on the beach.  Signs like this will suggest that there is a larger population establishing itself in the eastern Pacific, which may or may not have ecosystem consequences, especially for similar perch-like species that are found throughout Oregon, Washington and California.

Until then, we can only wait and see what washes up in the next round of debris this spring. Oh, on that note, you should probably read my next post!  I'll be talking about how the weather will likely be changing very soon, meaning it is just about the optimal season for beach combing in the Pacific Northwest.  Go shake that sand out of your walking shoes! :)
Posted by Unknown at 4:22 PM