I know it has been a very long time since I posted (several weeks!), so I wanted to do a quick catch up on what has been happening on the marine debris front: not a whole lot.  Due to calmer seas this summer and the fact that most of the larger floating debris reached eastern Pacific shores in Spring, things have quieted down quite a bit.  In fact, NOAA hasn't updated their GNOME graphic (marine debris model) since early July 2013, which depicted most of the debris west of US shores.

However, that doesn't mean there is nothing happening. In the past month, much legislation has been passed in several western states granting funds for debris cleanup, meaning that states are recognizing the problem of marine debris, and is great news for those coastlines that relied primarily on volunteer and NGOs for beach clean ups.  In fact, some of this money will probably go to assist these organizations as well.

Speaking of beach cleanups- it is that time of year again!

Oregon SOLVE is hosting its fall "Beach and Riverside Cleanup" on September 28th. This is a great event funded primarily by the Oregon Lottery which gets volunteers to participate in cleanups of 100 different river and beach sites in Oregon state.  Pick a location near you and help clean up!  I had lots of fun at this last year, and found it to be very well-organized!

You can learn more on SOLVE's webpage.
SOLVE is the organization responsible for those great beach litter stations found along the Oregon coast. 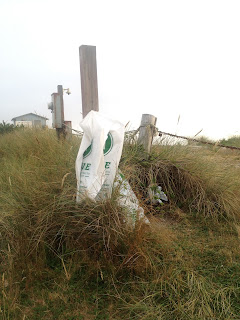 Remember, we will keep seeing debris for many years to come, and the normally-generated beach debris from litter, recreation, and fishing is in itself a daunting issue.

Keep posted- more to come soon!
Posted by Unknown at 10:46 AM